Ever since we first heard of Covid-19 and the term “lockdowns” we have been continually lectured by our political and health bureaucratic leaders that “we’re all in this together” in the fight against this new pathogen that had hit our shores.

If you were like me you probably initially gave those same politicians and health bureaucrats the benefit of the doubt and wished them all the best in what we were told was the greatest challenge to our country in over 100 years. After all, it’s part of the Aussie spirit to come together when we are challenged by natural disasters such as fires, floods and cyclones as well as challenges such as the various wars our sons and daughters have been forced to fight in.

It’s a part of our culture, our history and our inheritance to come together and rally behind our leaders and I have no doubt I was a part of a significant majority of Australian’s who believed just that when this covid-19 journey commenced.

Our politicians and our health leaders all had our good will and our trust that they would do what they could and should to protect us as much as possible. 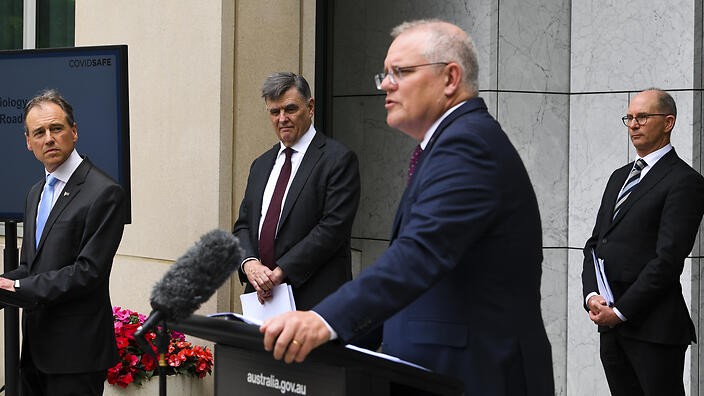 In the journey of time since then though, that trust and good will has been consistently eroded for many of us.

We were assured initially this would just be a few weeks to flatten the curve so our hospitals and health staff weren’t overwhelmed. They never were, but sixteen months later we are still being locked, down, still being restricted, still having our borders closed and still being divided as opposed to united as a nation. Citizens have been banned from travelling either overseas or interstate, a number of our Premiers have shut down whole or significant parts of their states for just a few cases, restrictions have been put in place on gatherings, on sport, on pubs and cafes. Our governments have made face masks a fashion accessory, a symbol of mass obedience to a government deity, and for some a tool to impose their moral superiority on others who refuse to conform. 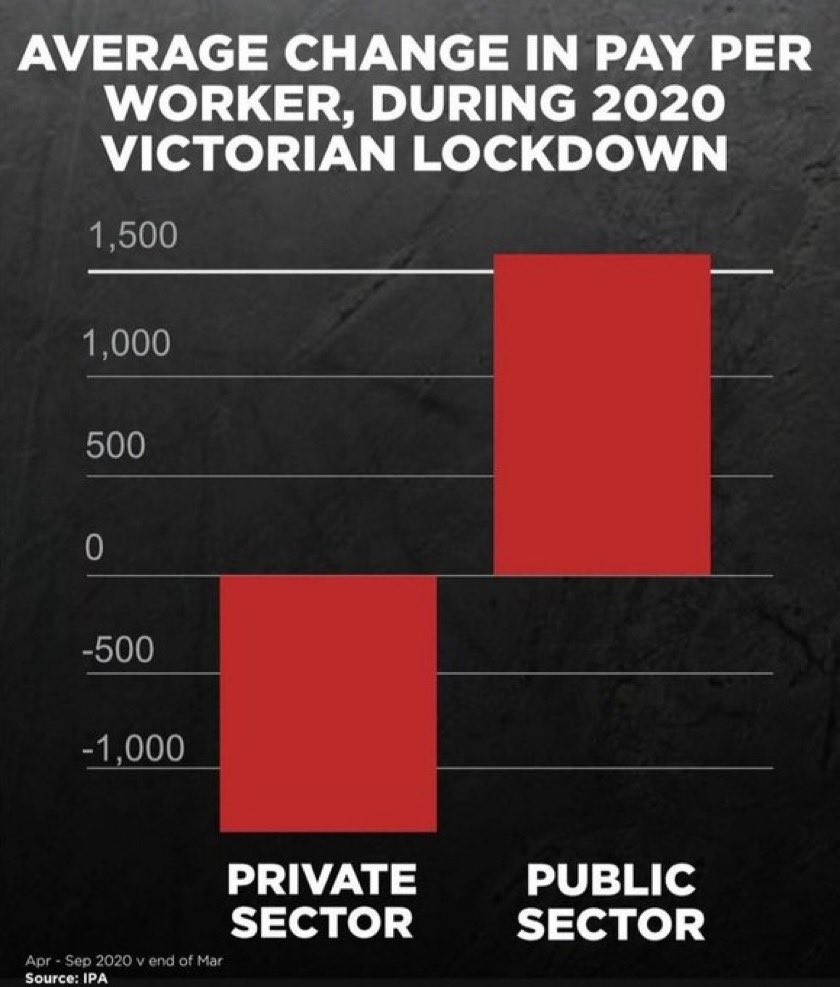 Since covid-19 hit our shores, we have seen the public sector not only go untouched but instead have grown both in numbers and been rewarded with wage increases as private business and their employees have been put through the hell of lockdowns and restrictions. In Victoria, it has been one lockdown after another while a conga line of politicians and bureaucrats have either lied, misled or if you believe them forgotten important aspects of decision making that contributed directly to those four lockdowns.

As citizens we have tried to figure out the justifications behind decision making for confusing restrictions that make no sense. An example of this is how regions and towns such as Mildura have been placed into lockdown despite no existence of covid-19 there through the duration of this so called pandemic. We have sat back and witnessed soulless, heartless and vile politicians imposed border bans on families as their loved ones required life-saving health care or they simply wanted to say their last farewells at a funeral of a family member lost.

Most recently that heartless attitude was demonstrated when the Victorian government refused a family an exemption from restrictions for the attendance of people to attend the funeral of their eight year old son. Despite this boy’s family living in Warrnambool a country town barely touched by covid-19 a health bureaucrat decided that the youngster didn’t deserve to have people attend his funeral to pay their respects.  More galling our politicians and Chief Health Officer wouldn’t own that decision, instead choosing to justify that decision by hiding behind that faceless bureaucrat. Then to rub salt into the wounds of that devastated family they lifted restrictions for regional Victoria only a few days later.

Most of us tried to process it, to justify it, but how can you when you ask yourself “What if that was my child that I was burying?”. There is no justification; the people behind that decision are vile soulless individuals who don’t deserve their positions of responsibility and privilege.

Talking of soulless who can forget what Queensland Premier said about denying a pregnant couple in NSW access to a nearby Queensland hospital?

“Those hospitals are for our people”

Since when do we view other Australians as those other people? 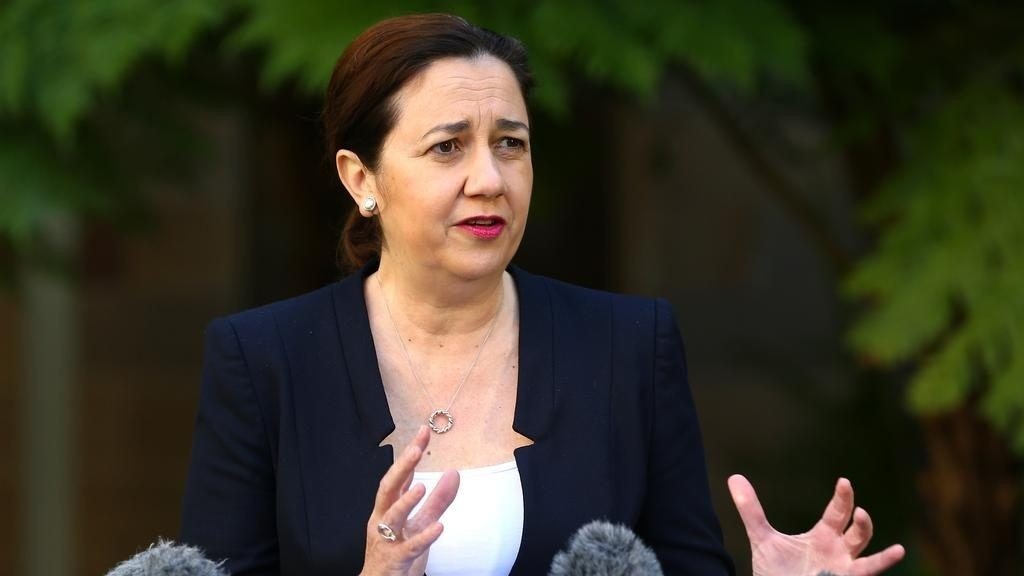 Then there is the over the top behaviour of our police forces, especially the Victorian Police. Before covid-19 hit our shores you could not have found a more enthused supporter of our polices than myself. Ever since then that support, that trust for me has been eroded with every oppressive, arrest and intimidatory action I have witnessed over the past sixteen months. Normal law-abiding citizens have been harassed at home, arrested for Facebook posts, bullied and even assaulted all because they disagree with the path our government has us on. 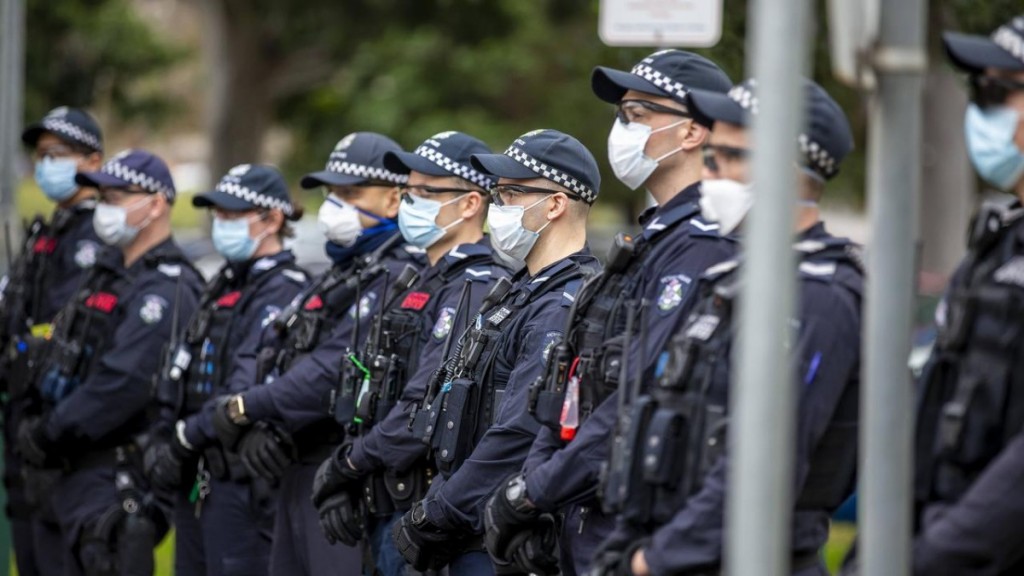 Had they been protesting a cause our government was sympathetic towards such as BLM or climate change then there would be no issue. Our police force has been turned into modern day clone of East Germany’s infamous Stasi police from the Cold War days. If there is a new government elected next year a Royal Commission called into the states police forces behaviour and management.

So when you take all of this into consideration  and you then witness the G7 leaders gather in Cornwall England and ignore every rule they have rammed down our throats for these past sixteen months, you blood would have in all likelihood hit boiling point as mine did.

Their behaviour throughout this event covered by the world press simply demonstrated their absolute contempt for the people they govern.

For the cameras they performed their pantomime of elbow bumps, social distancing and mask wearing but then in front of those same media cameras they actually had the audacity to put away their silly games and show us what they really thought of us. After nearly two years of lectures, draconian restrictions, laws, lockdowns and enforcements that destroyed businesses and lives, our political elite showed us just what they thought of us and it wasn’t pretty viewing. 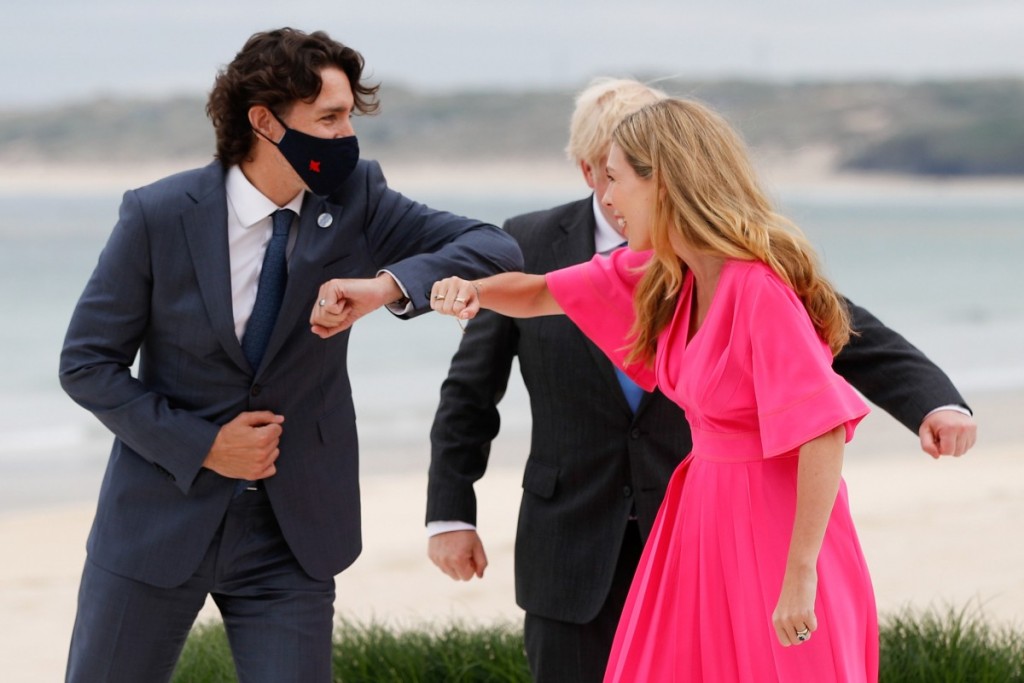 As a Canadian Christian pastor was being arrested and taken away to prison in front of his distraught family in Ottawa, that vile human that Canadians have bizarrely elected for two terms in Justin Tredeau, walked up to greet Boris Johnson and his partner on the beach platform with Elbow bumps. As he did so he put his mask on for all of five seconds and after the ridiculous elbow bump interaction and he had moved his required six feet away and he simply took his mask off. What was the science behind that?

This ensued a conga line of the G7 leaders greeting the British PM before they were all appropriately spaced for their photo op. As soon as that photo op was finished, that social distance spacing went out the window when they moved onto a cocktail party with the Queen. Remember her, the elderly woman who was forced to sit by herself at her husband’s funeral in front of the world media away from her family and friends at a funeral with limited attendance due to covid-19 restrictions. Obviously those restrictions no longer exist when G7 leaders are involved; either that or they take us for fools. 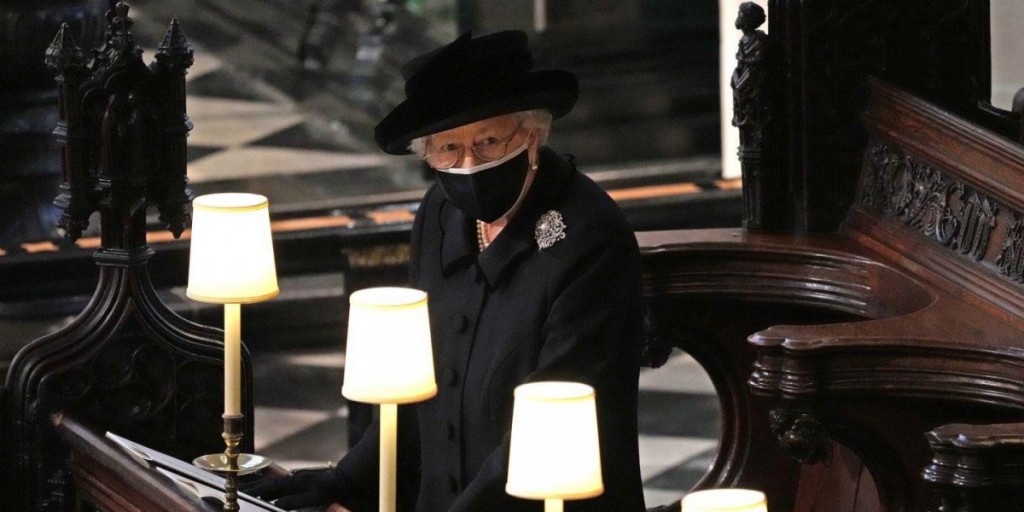 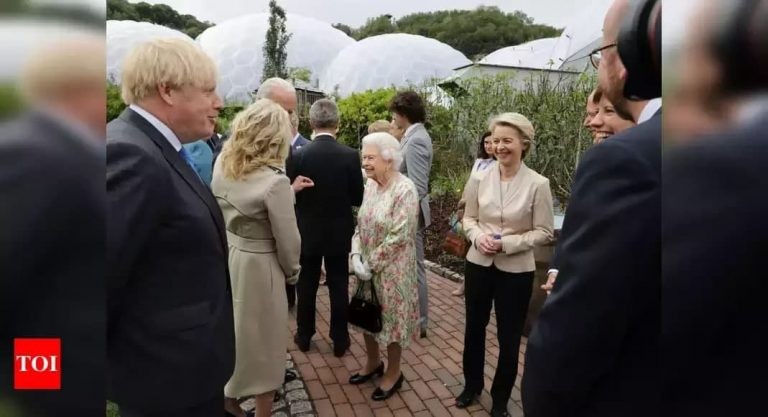 Then there was their barbeque on the beach where there was no social distancing, no masks and no restrictions rules on numbers of people who can gather were observed. Anybody watching on had to be thinking “are they taking the piss!”

The next day the theatre became even more absurd when Boris and the two EU leaders stood in close proximity in front of their chairs with masks on for their next photo op, but then as they all sat in their respective chairs their masks came off. This virus is obviously incredibly smart when it can distinguish between humans that stand or sit before infecting them, or were they taking the piss again?

After all why wouldn’t they think that? They have locked us down, removed our freedoms, ruined our businesses, harmed our kids, restricted our movement, forced us to wear face coverings that we all know don’t mitigate any contagion. They have stopped us from visiting our family, our friends, going to church, participating in sports or going to gyms.

In the very worst of scenarios they rejected safe, effective and time tested prophylactic drug treatments in Hydroxychloroquine and Ivermectin in preference for vaccines still in their trial stage and distributed without the usual rigorous testing processes. In doing so how many unnecessary deaths have occurred worldwide?

Yet we have re-elected them all.

So despite the pain they have inflicted upon their own citizens, why wouldn’t these so called leaders paraded around for a weekend together having the chutzpah to either think we wouldn’t care or even worse to not be bothered if we did.

The definition of contempt of the Cambridge dictionary website is “a strong feeling of disliking and having no respect for someone or something” I would contend that those G7 world leaders and those others, such as our Prime Minister, who were riding their coattails grovelling for the crumbs from the table, have proved that definition emphatically. They have zero respect for the people they govern unless it’s around election time, which is the only time they pretend to like you.

They hold us all in contempt, If you cannot see that after the past eighteen months, then your eye are simply permanently shut to it. 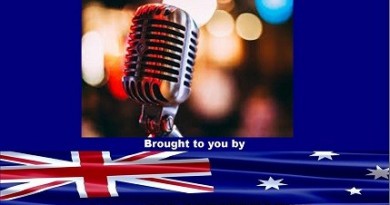 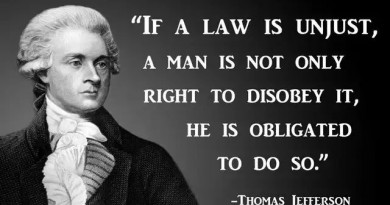 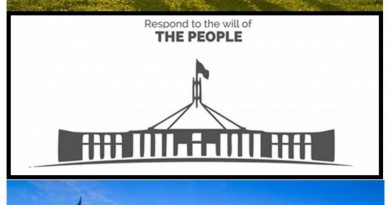 time to get on the phones